both zip nodes for Enumerations are quite broken. enumtype propagation upstream does not work with their generic implementation.

ok, just to give you a hint of context

For microdees upcoming weekend show i decided to tackle livvvveosc with Message again. I hope it is not giving away too much, but as you can see, I want to strongly type the entire osc input coming from ableton (in this case all tracks, return tracks and even the master track), which makes the whole remote API endevour a lot more maintainable. 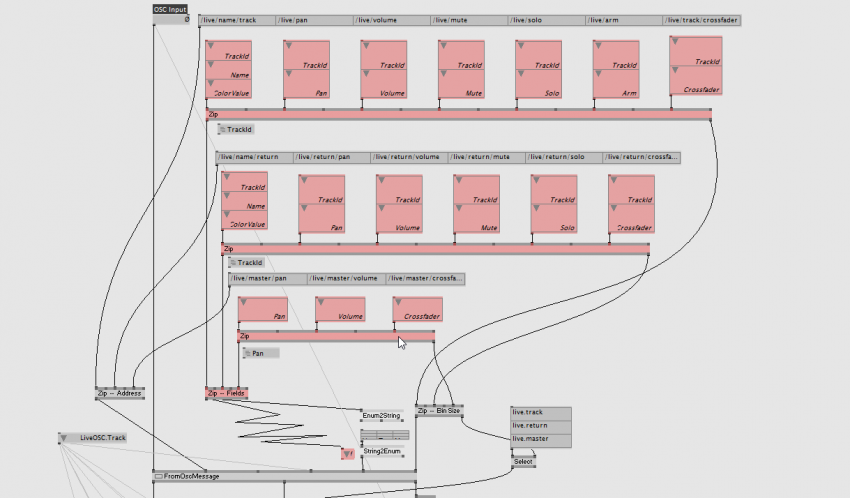 When I don’t use the enumzip, but a single IOBox everything is perfect. It then warns even nicely, if a specific used Formular’s Field is renamed from somewhere central in the application (then the Field enum entry does no longer exit, so it turns reddish).

With zip it fails, and adding Null as @anthokio has its own depths, not to mention the clutter.
Ofc I could even settle for string-based definition, and loose the warnings alltogether, which would make it less maintainable again…

So what’s probably best is to make a custom enum zip. Is there a way in the sdk to softly “retype” an EnumEntry pin to accept EnumEntries defined downstream from the zip?

PS: enum’s have come quite a way since my early vvvv days. I wouldn’t even touch R+S because enums were so shit. seriously good work since then, whoever did this

this is with Null:

while it is in fact functional, it still highlights in red.

Devvvvs and knowledgeable people, do you see any way to fix the Zip, so it works as expected, making zipping enums easy and safe?

hey marco. couldn’t really fix the original issue yet. However your last example shouldn’t show up as red now in current alpha. Can you confirm?