I’ve recently got stuck with a Writer (EX9.Texture.AVI) node output.

Here’s what I have: 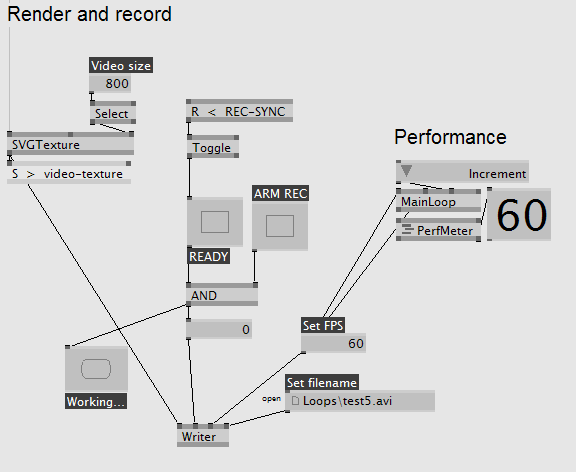 a) Some patch with LFO-synced animation which is converted to a Texture at the end of the flow and fed to the Texture pin in Writer node.
b) Writer node, which record start/stop is synced to LFO and controlled by ARM REC toggle.
c) All setup for Writer node is done according to documentation on vvvv-site (Increment time mode is set e.t.c.)

All this stuff is need to record loops from a different geometry sources in a patch, and have them all to be in sync according to LFO period time (which I set before recording).

What I supposed to get after hitting ARM REC button:
1)Toggle node recieves a bang from LFO and set to “1” (after it was “0”)
2)Recieved “1” passes through AND node (the second pin have already recieved “1” from ARM REC node)
3)As a result of step 2, “1” goes straight ahead to a Write pin and starts texure recording until next “sync” bang is recieved and recording is stopped.
.
…
…
4)Uncompressed AVI movie with a certain length (26s) and fps (60).

But at the last step I have a very strange Writer behaviour. When my LFO is set to 8s (which results 26s video file) recorded file appears to be corrupted - VLC player reports missing index.

I could think that the problem is in a patching above, but if I set my LFO to lower values (e.g. 4s), Writer node works like it’s supposed to - it makes correct AVI with a certain length (13s) and 60fps.

instead of a screenshot please upload your patch so that we can try to replicate the problem.