Any suggestions for cases?

I’m thinking of perhaps a 4U rack mount PC case and a flight case like this:

…but surely there’s something more …elegant(?)

Needs to go into aircraft regularly (expect maybe once a month, but more likely every 6 months)

I have Codegen 4U-500 cases. They are heavy by themselves and once you add a flight case it’s nowhere near comfortable to move couple meters, lift into taxi etc. So prepare some muscles. Im not aware of any other choice btw.

yeah. i noticed that the rackmount cases are generally steel
ideally want something aluminium with light flight cases

need to keep within 20kg ideally

@antokhio : not really sure you ll fit 3 Graphic cars in the armor a30

also considering ditching possibility of 3rd gfx and going with a shuttle.

huh
that rampage gene III looks pretty sweet
it can take 3 cards (although one only gets an honest 4x, which is pretty standard anyway. but 2’d have to be single height)

oh yea sweet days when you could buy one slot gtx 9800 with svideo have only one left…
io: thouse new modern geforce’s you will go up to 3 to transform pc to an stove oven, just burned rampage 2 motherboard with vray rt renders…

Eyefinity instead? Could fit a shuttle then maybe?

that’s another inquiry
how bulletproof are the eyefinity’s?
can i get 6 DVI or VGA off without a dot of a problem all the time?
Can I chose how to group them reliably?
do they work with lots of different kit over long distances?

bit worried to try it tbh. but 100% willing to jump boat if it’s all there

well don’t think you would need more then one eyeinfinity actually
since can’t imagine running vvvv on 24 screens same time hehe due to perf…
(but never know)
with shuttles you have to be really carefull since video card might not fit due to lenght and it’s quite rare in shuttles you can fit 2 videocards. Micro atx’s boards are nice but chaises are russian rullete… The PSU might not fit with CPU, might be to low voltage might hell knows what… Everytime is same old good ‘f’k it’s not fitting’

What about custom made? I think you could make it a lot smaller if you remove the cd/drive bay, and put your SSD below the graphic card. Well, that’s what I want to do but can’t find the time to. 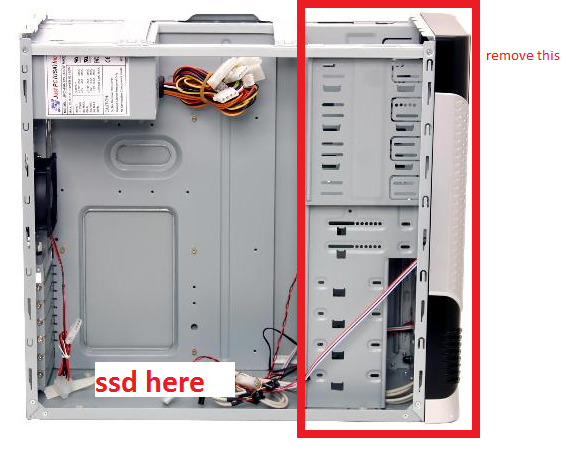 well the fly you are showing up is realy good, and NOT heavy. got a tower touring since 3 years with this type of plastic flycase. Less heavy than pellican ( pellican 's one are fro atomic war i think)

if i may suggest about touring ( surely you know it ):
you should avoid to roll it… wheels and screws and SATA connections doesn t like it when you are touring a lot. especially in trucks.

also PCI cards are not really happy to be transported like this, better to translate them being stacked vertically , and not horizontally or on a 45 °. got some surprised with a tower and a big GFX card > had to rebought a mainboard card

this one goes with DESKTOP processors, double gtx580m, even 2 of these would make a pretty decent system and much easier to transport…

@io : still only 1 gfx output on those things though (want at least 4 real outputs)
expect to be shipping video assets / texture defined states between heads, so all needs to be in 1 box really.

thanks for the tips @karistouf! i was worried about this. I was even thinking of taking out heavy gfx cards and static bag / bubble wrapping them between locations.

generally the thing i’m most frightened of is airplanes.
if its small enough then i can get it in hand luggage.
but if its big, it needs to withstand heavy handling (perhaps pelican/foam lined case)

with some protective flaps on over the front/back faces

i think there’s already some cases out there which go somewhat towards your description, and i’m not really willing to ‘weld my own’ at the moment, but good luck with that! curious what choices you’ll make for front panel.
designing a custom PC case is also something that i’ve always wanted to do, and with CNC/metalworking so cheap now (esp in Korea where I am half the time), and i’ve got pretty nifty at Solidworks now, its a real possibility.

if it were a real choice. what would people want the case to do?

some of those specifications conflict a bit. but just throwing the ball out there

p.s. the sidestep into the DIY world is obviously a longer process
for the time being it looks like a micro atx, perhaps with an eyefinity, or 2 single height geforce

Shuttle then, you may ask the NASA, I ve been told they have a special discout for clearance since last week…

and directly on board maybe?

12 lbs. (Actual weight may vary depend on systems configurations)

shuttles are a little less performance
lack of space for 2 dual height cards (though i’d prefer single height anyway)
also no space for the 4x PCI-E SSD which i was planning on getting, but perhaps that’s not sufficiently better than a 2.5" anyway
expensive

but shuttles are smaller, lighter and great build quality

This one looks pretty nice

also no space for the 4x PCI-E SSD which i was planning on getting, but perhaps that’s not sufficiently better than a 2.5" anyway
expensive

yep, I was reading about SSDs lately for my new laptop and it seems like there is no really important improvement from 250 MBps to 500 MBps, although the theory “mine goes all the way to 11” would tell that the second is twice faster… maybe anybody can explain that better?