Hi
currently I have a legacy Korg MicroKontrol (in a miserable state) and a Korg nanoKontrol (loosing bits at each use).
What are you using out there?
S.

NanoKontrol (I have a couple) not at all good, but really cheap and not worth stealing and if someone steal it, it is not a great loss

Hi
I guess you meant

not all that good

yes, seems like the nano series was really spot on, still it feel a bit clumsy to work with so small faders…

It’s nice enough, although I’m wondering whether to leave the fader bits in a bag altogether. And, Needs Moaar Knobs!

Not midi, but my XBox Controller sees quite some usage. 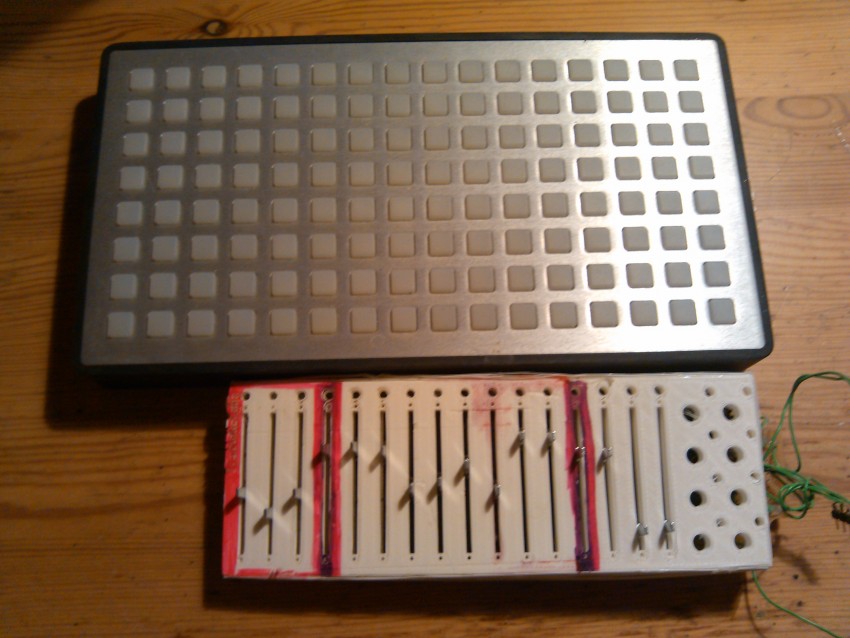 I just received pretty UV Leds. I also have a lot ultra bright smaragd green leds and all the parts are there to finally finish the controller you see in the picture in the next two weeks. But I use it like this since almost a year now.

As I am very inspired by the monome and the community behind it i will make everything open source and encourage group buys. maybe a very limited edition (about 20 to 30 pieces) might get preassembled.

Case can be 3d printed.

There are different variants of the controller it is an underlying modular system using group of 8s for each part.

So the basic one will be 8 faders. then you can add 8 rotary encoder or 8 buttons and so on.

It uses arduino nano clones from RFrobot as a cheap controller chip (14 euro) and the parts are cheap as well (80 cents per fader and special wavelength led, a bit more for rotary encoders).

Software wise it is based on serial osc massages and of course the receiver software is right now running in vvvv.

So you can program sequencers and stuff. A wireless version is also planned.

Project was born out of the lack of programmable controllers with faders. As I proceed with it I more and more see how possible it is to get a few out there as well and not just use it for my own. Hit me if you are interested everybody

I ve been active on MIDIBox for many years and I ve got a couple box packed with faders, encoders, pots, RGB leds, PIC microchip, ST32s, usb/midi interfaces, you name it!
I ve even got a MIDIBox SID octa channel synthesizer…
Self built stuff is good for home studio but it s not something you want to take around in a backpack. 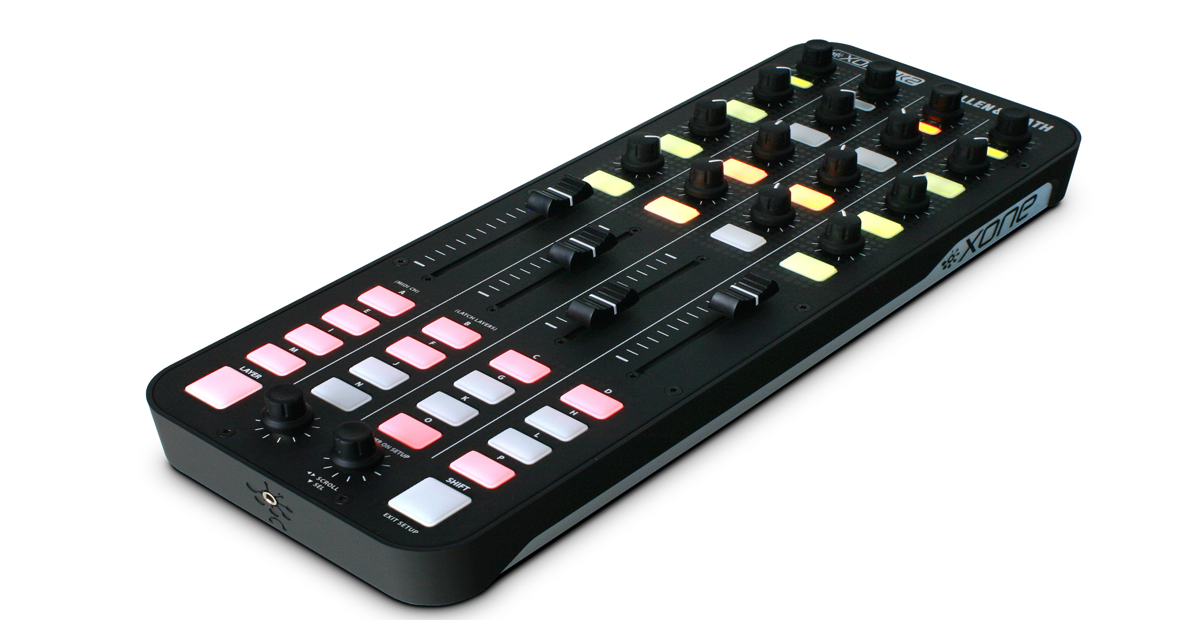 In our review, we find out if the Allen & Heath Xone:K2 is the ultimate 'slimline' DJ controller.

I got this one: akai-lpd8-subpatch, as cheap as the Korg’s nano’s, but it really feels like a better build quality.

And on the other end of the line I also have access to this beast, the Akai APC40: midi-mapper, need to clean my work, cozz I got it under control, way more advanced than the contribution.

An we are working for support for this little gimmick, the PS3 uDraw, http://en.wikipedia.org/wiki/UDraw_GameTablet, they are wireless and super duper cheap!! You can find them for less than 20 euro’s (because no body wants them it seems). Yet made for children, aka super strong and decent.

I love using the Behringer BCR2000 with vvvv. Its by far the best price for that many encoders (32 of them) and the top row of 8 has 4 “pages” so you get 24+32=56 encoders without even changing presets.

Because they are encoders and not potis you can load midi values into it from vvvv, so I have a way of saving values on the fly and then loading them back onto the bcr to have seamless changing of values without jumping or the need for soft takeover.

I actually have 2 of them next to each other now and because they have midi in, out and through AND USB, i can hook one up to the other and just connect to the PC with one USB. Very handy and quite easy to use in vvvv - there is a help patch someone made, that i used as a starting point.

I would say its the best value for money midi controller out there. I bought a used one of ebay for 120 euros and new one for just under 200 i think. The parts alone are worth more than that. The BCF2000 is also good value, as you wont find motorized faders in anything near that price.

Also just got the new Behringer CMD MM-1 and will get some of the other modules too - finally an affordable “modular” midi controller.

@westbam, that udraw thing looks nice. Especially for 12.99 euros on ebay for a new one - thats ridicolously cheap!!

Even if i could just use it to have a midi x/y pad, like on a Korg Kaoss pad, it would be totally worth it for that price.

When do you think it will be ready?

It IS ready, m4d is just ashamed some one will laugh at his code. ;)

Yes, it has multitouch for fingers, already patched pinch and spread for it, it determines if you use a finger or the pen, pan/tilt meter, 11 buttons, comes with a dongle, but the bad news is that it doesn’t come with 3 aaa beteries :(

oooops, you got me there… will look over the code tonight and post later or tomorrow. promised! ;)

I have some ordering to do!! I think the batteries will be more expensive than the bloody thing itsself… haha, but it kind of sounds too good to be true to get all that for less than 20 euros. I saw they were originally selling for 120 dollars and i guess they are selling them at (near) cost right now.

hey, quite a busy weekend, but here goes… udraw-hid cheers!

I’m using a QuNeo from Keith McMillen Instruments.
It is superlightweight and transportable. It has exact the size of an iPad, so it fits in standard iPad holders. The Touchpads are velocity sensitive and can also output the x/y coordinates you hit the pad (rather lowres, not like a computer touchpad). And very interesting for vvvv: it can output OSC.
http://www.keithmcmillen.com/rendition.photo/photos-quneo/QuNeo_1_880x360.jpg
What they could improve: LEDs are not RGB, only bicolor. The faders a little hard to touch. If you need good faders the QuNeo is not for you. The rotary encoders are excellent though.