i’ve brought this up once already (forum:vvvv-in-general-usability-weaknesses#comment-106378) but would like to bring it up again in an own thread:

when creating an IOBox by middle-clicking from a Boolean-pin we automatically get an toggle-iobox. when creating patches with lots of bangs it’s cumbersome to convert these into a bang iobox (which i quite often do especially for readability of the patch to indicate that only bangs should flow around this thread).

would it be possible to have a context menu for middle-click-boolean-iobox-creation like we get for normal ioboxes? something like this: 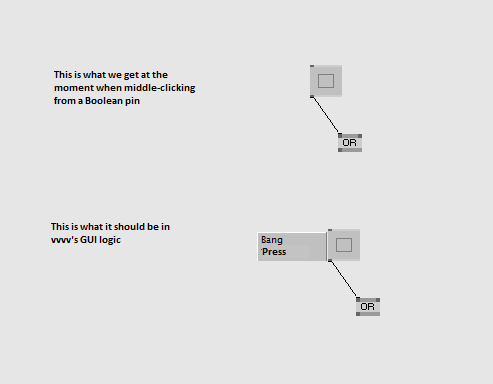 why not include toggle as an option as well?

well, if toggle is the default there is no need to put it in the list as an option.

when creating a regular IOBox “real” is default and not in the options.

yeah, didn’t think of that!