Hallo
has anybody ever managed to get an animation export from Blender ? Other suggestion, ways to do it ?
tx
Simone

should be straight forward (since there are no export-parameters to change).
i didn’t get it to work with blender 2.49 though - even importing the files in version 2.5 and then exporting to collada didn’t help.

hi
I noticed that if I move the time to a certain frame the it exports the scene at that specific scene, ie: it only exports a single frame. Now I am wondering if that s a problem with the exporter or with me. There is a certain span of frames that are supposed to be rendered (alt-a shows it), is there anything special I have to say to blender so that it will export a span of frames?
tx
Simone

again, no, nothing special to my knowledge. have you used automatic keyframing? which version are you on? can you show a screenshot or s.t. of the like? 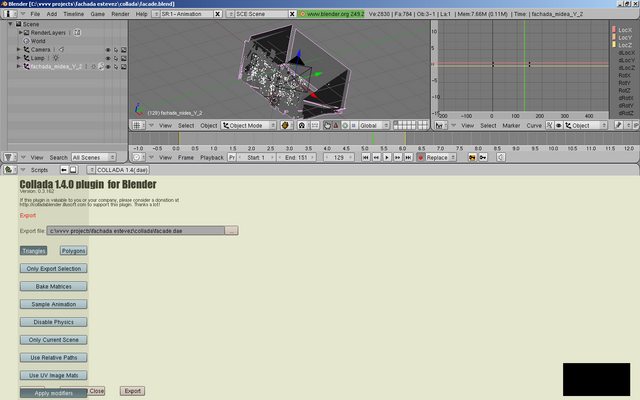 you definitely should go for the 2.54 beta, import you’re work there and try collada-ing then.

hmm not a blender one, but 3ds max animation export work fine, without some super complex transforms, with Open Collada works fine. Even skining wooorks good. But no particles, and some other s8t.

What a GUI change on Blender 2.5 ! Looks way better, still I nned to find my way on the new interface now…

After a bit of mangling around I ve clearly understood that all the physics animation can t be exported as a collada file since they are stored as special files “outside” the normal Blender animation workflow, it seems like it stores the meshes position frame by frame. What a pity, anyworkaround? Rendering scenes as videos or sequenced textures is a pita and not really so nice for real time…

Anyone had any luck exporting animation from blender?

I’ve made a simple animation(rotation of a path curve) but I can’t export it.

Something else…I’ve downloaded a .dae file from the web,I imported it into vvvv and it worked fine but when I exported it(as a .dae file) from blender(without animation) It doesn’t load in vvvv and it doesn’t show me any options so I can do something to fix this.

there is no options on collada
that might be due to lack of implementation of collada in blender
try search for some collada fixes on blender.org
this problem is a blender problem mainly…
don’t expect also to have something more then translate rotate scale tho

OK…now I can see the model when I don’t have any animation on it…basically the problem is that the animation I’m using is made with a path ( curve path) and VVVV seems to not recognize it, so as with astroboy_walk example I will do the animation with bones( use armature) and try to import it again in to vvvv…hope it works. if not is it possible to make bones in vvvv? and animate it in there?

Well…I’ve manage to import the animation into vvvv. Basically the animation needs to be made with bones(armature) and then I animated each bone with keyframe animation(rotation). Then in pose mode there is a “pose menu” in which there is the option to bake the animation. After that I exported it normally as a collada file…

In VVVV though I had some issues…My model is divided in 8 parts…I have only animated one of them just to test it…well the part that was animated in vvvv appeared on the screen but in the wrong position. So to make it work I disconnected the transform link from mesh node to skinning node and it went back where it should be…weird!