Please include a close button in patch windows (or another one-click solution to close a window with the mouse). Thanks.

does anyone else need this? because i don’t, really

I personally wouldn’t bother using a close button if it was there, as hiding or closing by hotkey is way faster than I could ever aim for that damn thing, also hiding a couple of windows successively would be rather slow.
Maybe as an addition to help beginners, but when doing a lot of patching, I wouldn’t want to use it.

offer it as an option in the args.txt ;)

what i don’t get: first, there hasn’t been a single comment by @joreg or any of the other devs regarding this long requested ‘feature’ of mine, i wanna hear reasons why no close button is better than having one please.
second, the only reason why in the world there is no close button must be an aesthetical (read: minimalistic) one. so just to have a blank menu bar on this software one of the most basic GUI ‘features’ missing… i’m sure there a lots of users that rather use the keyboard, but why ignoring everyone who wants to use the mouse? i simply can not unterstand this. and yes, at least make it available as an option please (args.txt), so for those who for whatever reason prefer not to have a close button in front of them don’t have to. plus, there is even the option to be consistent without using a button: make the window close (hide) itself when you right click its menu bar.

i think they were ambivalent about the close button because you can either close the window which will delete its parent node or switch its parent node to node-only mode (aka hide it) and i guess they couldn’t decide which one it should be.

close button would be such a buzz kill, as was crack.exe removal
petit prince any1 ?

@rrrr and @velcrome (and others I guess):

As much as the discussion about the usefulness of a close button is debatable, I agree that a dev answer would be pretty much appreciated.

Now let’s expand a little bit and go into the tech details ;)

Basically vvvv forms are created as “Popup windows” (eg: WM_POPUP), which means they have no close button, and neither appear in the taskbar.

It is relatively straightforward to have a window style as WS_EX_APPWINDOW, which creates an entry in the Taskbar, and has the standard Minimize/Maximize/Close buttons.

Now I won’t go into the “bla bla I prefer to have in taskbar” or “That just taskbar pollution” type of “discussion”.

one important thing is having a popup form also prevents the possibility to have System Menu, eg: 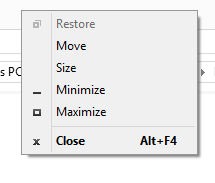 I’m pretty sure that nobody will argue against the usefulness of that default option in Windows (eg: Alt+Space -> Down to move a window lost somewhere on the second monitor).

Only thing, you can’t have both, it’s either Window in taskbar + close button or not having access to this option as 4v windows are implemented for now.

So by preventing close button, you also remove an extremely useful feature (many times being cursing in project because could not access a random patch which was left on another monitor).

So having a shortcut to switch modes would be really handy (and eventually to set default in command line).
It’s really easy to do (just need to change form style in Delphi, or just use SetWindowLong windows function with the right flags), and will maybe finally close that debate once and for all ;)

PS: It’s actually easy to do it from Plugin Interface (takes about 10 minutes), but I believe that should be native ;)

PS2 (@microdee) : Close button should just hide the window, when you close a document in visual studio you do not remove it from your project ;)

oh wow @vux thanks for that information. so it means that it could be hacked? how? can i pay someone to hack this? having the patch windows in the taskbar would also be great because the window switching (ctrl+tab) function in vvvv has also become completely unusable since the introduction of that tree view…