Thanks very much for the possibilities with the BASS library.

I’m having some issue getting AudioIn (Bass Asio).v4p to work though.

Any clarification would be greatly appreciated.

Asio capabilities are a make or break thing for me and VVVV, so please let me know of any knowledge on the subject.

Well there’s a lot of different factors that make it work or not, so there’s no simple answer.

Does it work with another software?

Also one thing is to try it out with setting the card as default (sometimes it will select the internal one by default).

Thanks for the reply!

Good news, it appears that the DShow9 AudioIn project saved in root was enabling the onboard card. Deleting that and setting my external card as default enabled both BASS in and out.

However the input was reading very low (source gain is at max), and I had to multiply the input after the RMS by 300.

The latency seems pretty good, but I can’t see anywhere to adjust the buffer size, samplerate, bitrate, or input level. 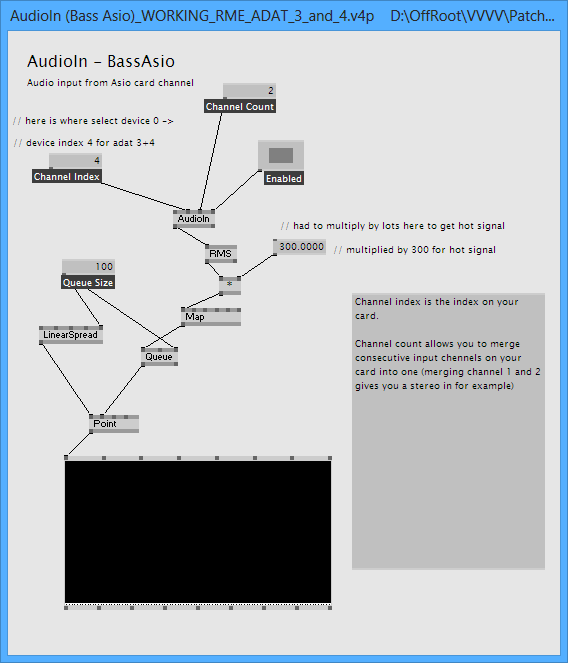 There appears to be an issue with the way FFT (Bass) is processing internally from AudioIn (Bass Asio).

If you see the picture and attached patch, there is an approx. 1000ms difference between the RMS output and the FFT output.

Can anything be done about this? 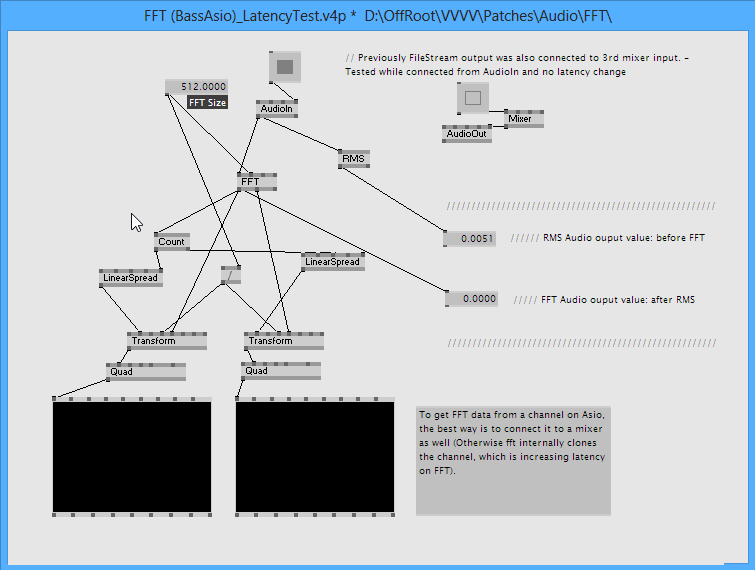 Ok, strangely - and, as an update: swapping out the BASS FFT for a DShow9 FFT seems to have resolved the issue.

Hmm, just curious, how did you go about connecting the BASS AudioIn to the D9Show FFT?

I am also curious how you connected them. Looks like this is the only way for low latency FFT itm?

Hmm, it’s odd. I’m not sure if it’s using low ASIO latency on the FFT, or just the DShow9.

I used the BASS ASIO audio in, and the DShow9 FFT in two separate streams of the same patch (two separate inputs (1 each), but from the same input source, eg: Realtek HD Audio input …). You sometimes have to de-select, then re-select the inputs to get them to work

I think I see what you’re saying, that you’re using DShow9 routed to your patch, not that Bass ASIO is interacting with DShow9 in any way, even though it is still in the project.

I guess for me, it still does not solve the problem of latency with the Bass FFT. Everything is close to working the way I want, but this latency makes it unusable live unless I’m going for some weird delay effect. But here’s an example of the concept I was trying to put together, keep in mind that I had to re-sync the audio, because it was about a second or so off:

Using Reaper and Rearoute (their version of a virtual audio cable which shows up as an ASIO interface in other programs that support ASIO), I was able to create streams running from each separate track housing individual parts to different vectors in the vvvv patch. Again, this was all synced in post, but it is actually reacting to the sounds, and I would love to be able to do this live.

As stated in other posts, RMS works just fine and as you expect, but it would be nice to have FFT to utilize the waveforms, as I did with the bass part in this patch.

Thanks for the help everyone, hope there is a solution/resolution to this issue one of these days.