I’m setting up a London-based digital surgery called V4Wednesday that’ll be occurring every other Wednesday from the 26th of June at the Electric Matchbox in Hackney Wick, around the corner from the Overground station.

Its not only for vvvv users as the part of the intention of the project is to encourage collaboration between people with different creative disciplines and skill sets such as authors, theatre directors, sculptors, illustrators, architects etc.

The blog, new born, is here with schedules and rantings.

At the moment nothing is fixed, despite what the schedule would have you believe, but this is what I think should be going on:

What do you think? Ambitious?

If you have any ideas for what we should be doing at V4W, state them here, state them now, and come on down.

social patching always is a great thing;
we try to do something similar in italy.

but why do you want to communicate this on an external blog?
please let us all participate!

Sounds great! Thanks for taking the time to set it up, I’ve not been to Electric Matchbox before but it looks cool :)

Incidentally some good friends have a space a bit north from the rail station in Hackney Wick. Might be possible to take some projects to their space as well if we have some things that are nicely polished, although I’ll have to confirm it’s possible.

I’m sure a few of the other V4 Londoners will be interested to hear about this as well. Anyway, sounds great and I’m looking forward to the first one, see you there!

Kalle, a very good question. I’ll try to communicate as much of V4W here as possible too, certainly all the upcoming events and the outcomes of projects/experiments. I need to get better at propagandizing!

Its not a strictly aimed at the v4 community. Its more like “all visionaries welcome, especially patchers.” The focus and topics of discussion aren’t going to be so vvvv orientated, or even programming related, although my workshops are.

For example, talking about digi-tech-art for communicating the experience of disability/re-enabling, wouldn’t seem right here, but maybe it should be… I appreciate that these pages aren’t only about patching.

Lightmare, spread the word! Man, that’d be dope to have an over-spill space. I hope we need it! Be good to see you too!

Oh wow. Rather large mistake I made there, which explains alot. June should be Jan(uary). I really should sleep more. 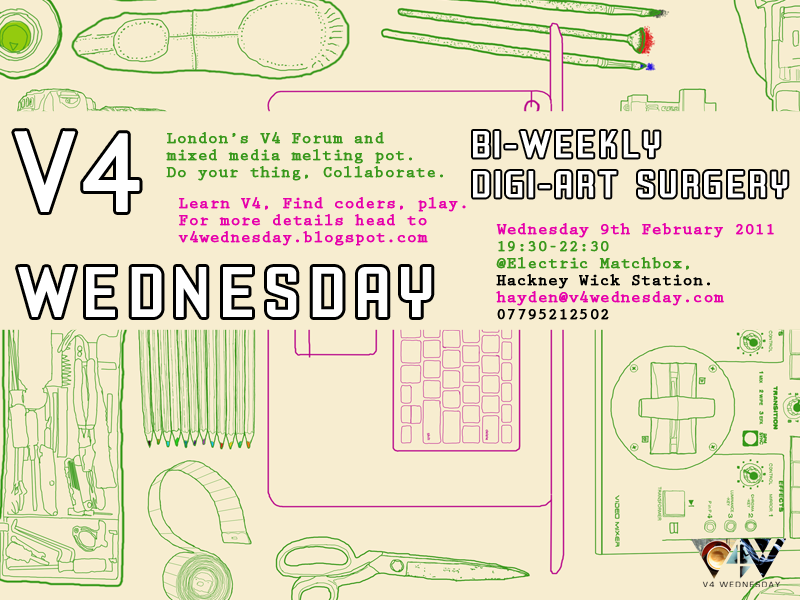 The on the birthday of Captain Cyborg I thought is tele-kinesis (NUIs) might be a nice subject do try experimenting with.

Oh good idea. Will I miss out much if I can only come to the 1st session each time? (work in London, but live miles away.)

Hi r4dian. I’ll see what we can arrange. I’m glad you brought it up.

Cool, let me know - I can’t make it today anyway, but next time? 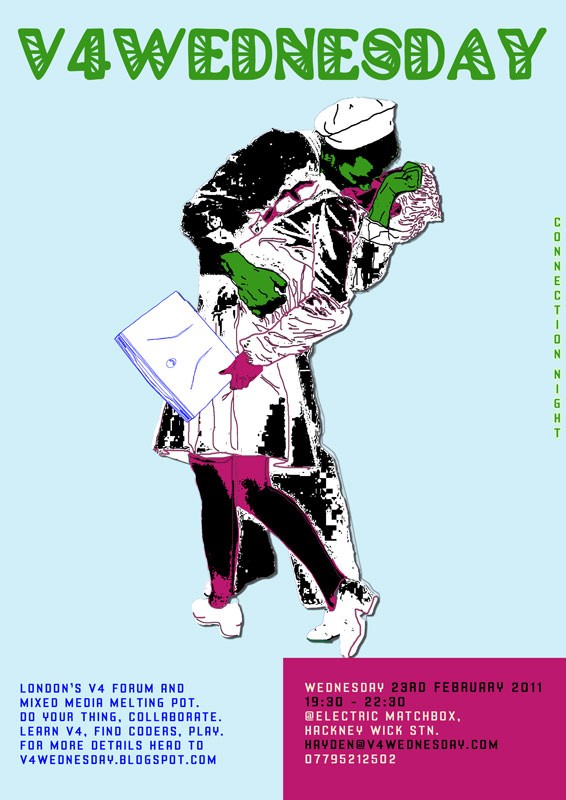 Too bad you couldn’t make it last week, but we’re back on again. I’m tempting fate, but hopefully I’ll be able to bring some interesting news about V4W later today. Wish I didn’t have to rush the poster this time around. Oh well.

Should be around tomorrow, catch up there :)

Nice one, Vux. Got a nice little mini project for us as part of BYOB London. Nice if you like projection mapping on big block of polystyrene.

More group patching, another rushed poster. When will I learn?

Aw, I quit London now, someone needs to start something in Brighton/Portsmouth. That someone could be me I guess?

Along with a discussion about processes I might have a little competition tonight, if I think there’s time.

The earlier you are the better your chances of winning!

Hope you can make it.

PS R4dian, I’m gonna try to sort out the web presence over the next month so eventually you’ll be able to join in in some way.

Its already mentioned in the blog post but just to say, I’ve started sorting out a discourse page on the website http://www.v4wednesday.com/p/discourse.html.

It goes back to one of the early principles I outlined of how it could be used to talk about things that aren’t strictly vvvv focused.

It can be to chat about projects you would like to do, about projects your doing and would like a hand with, to offer tips and tricks for software that we use heavily (such as but not exclusively vvvv, and on that note I’ll be pointing people here too), non-software knowledge that could prove useful for interactive art and design, and use it to say what we’d like to see: how do you see (or would you like to see) digital art and interactive design moving forward? Where is its position in modern culture compared to other visuals arts? As such a young art form what will help it develop more favourable comparison with more established mediums? Does it need to?

Anyway, hope you can make it down. 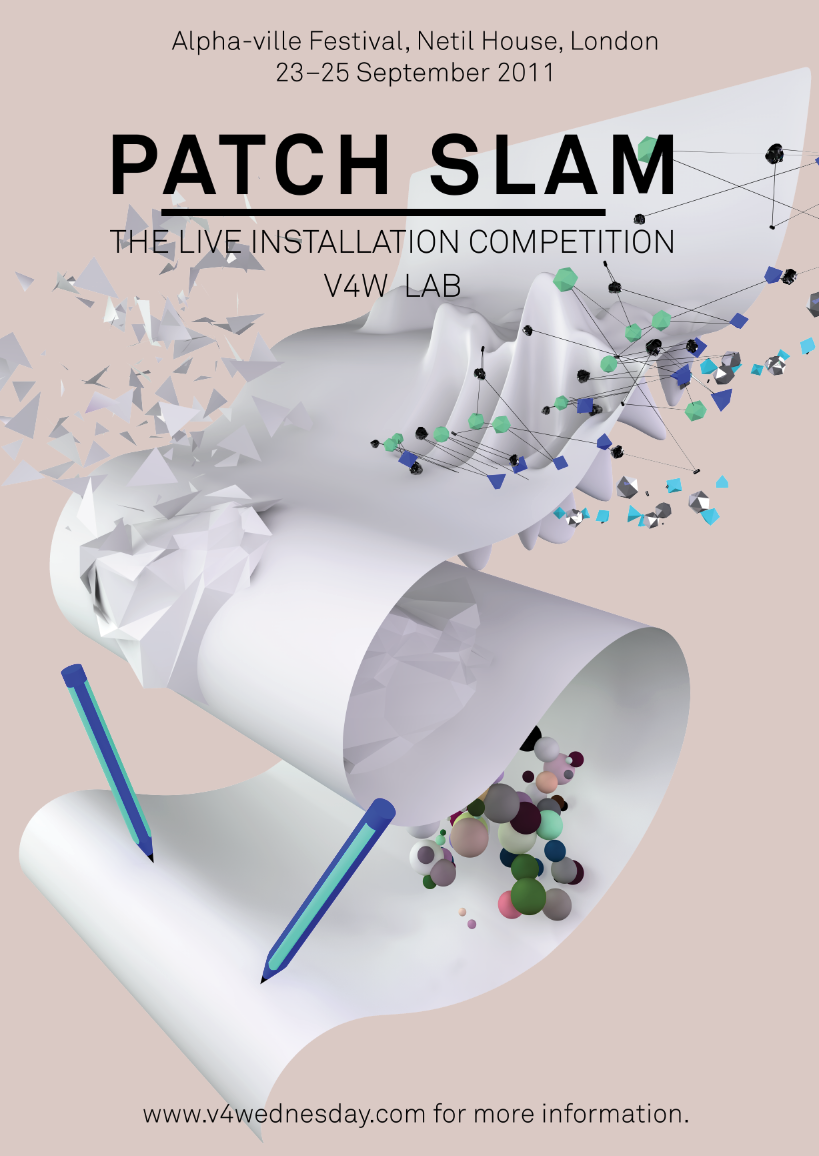 I think Gaz mentioned this earlier (cheers mate, and I’ll be saying that again). I working was stuck out of reach of a working Internet connection.

But anyway, the Patch Slam is on!

I set up the patch slam with the intention of a competition in which vvvv users team up with pals or strangers that don’t use vvvv and try to make an installation in a weekend, a bit like those 48hr film competitions you may have had come across.

The space won’t allow for so many teams going head-to-head (this year…) so instead we have arranged for the space to be used by one team at a time for each day of the festival, comparing all of their work at the end of the festival.

But to keep the element of quick thinking in store, the inspiration for the pieces are new poems about the future, and the poets will perform readings in the work at the end of each installation day.

There are various rules and nuances for the competition that I won’t go into in detail here as you can check them out at the http://www.v4wednesday.com website. But I will say that while the template for the installation has a heavy projection leaning, originality is king.

I see this competition as a precursor for something a little more like a battle. A national one? An international one? We’ll see how this one goes first, but who’d be up for a (inter)national vvvv competition anyway? ;-)

hi sounds quite fun , as long as the battle is peacefull and motivate the sharing of creativeness and knowledge haha I,m a Gandhi fan http://es.wikipedia.org/wiki/Mahatma_Gandhi

I,m up for an international one ;D