Schéma Standalone is out yo! 😉 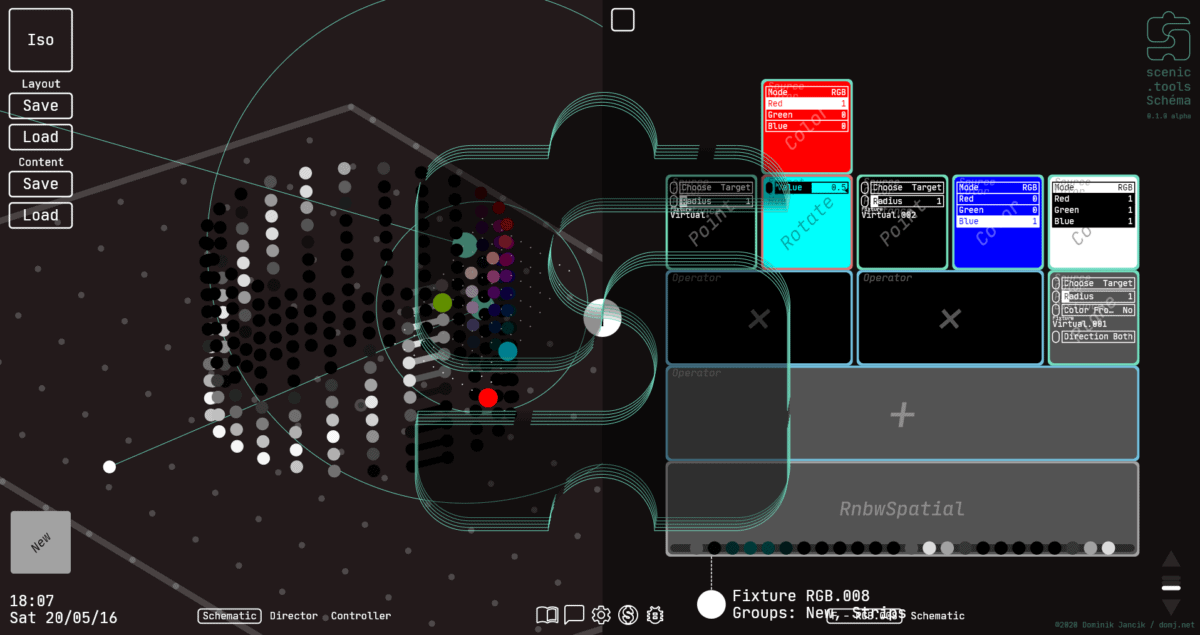 It’s aimed at atmosphere control. Eventually it can be your lighting desk, your VJ tool, your laser source, pixel driver, synth or whatever you can think of as it aims to fully leverage the powers of VL and vvvv and be open and expandable.

Currently it’s installed permanently running headless in one club, also tried it out in few small light installations and it was pretty fun to use.

But there is still a lot to implement, refactor and clean up so it’s not being released just yet, thus the WIP section.

If you want to read more in depth, there’s a WIP docu:
https://schemadocs.domj.net/

I will provide this thread with new information (and hopefully some videos of it in action) as it becomes available.

Also I have a workshop planned for the weekend of 25th and 26th of May where I’ll share the program and go through some basics. It’s in Prague so it might be a bit far for most of you to join but I’ll try to set up a stream as well.

More info on the workshop here

This two-day pilot workshop will introduce you to the secrets of light equipment and principles of visual programming. Schéma is a new software based on vvvv and VL for controlling audiovisual install

Well alone what I gather from your website and documentation: WOW, BRAVO!

Wow this looks great! Exciting days to work with VL :))

@Elias Thanks a lot for the kind words, it means a lot to me coming from you and thanks again for helping especially with the memory leak issues and big thanks to the rest of the vvvv team for dealing with my silly questions and requests all the time.

At the moment I can hardly imagine doing a project of this scale at this speed in anything else but VL/vvvv, the runtime editing really speeds things up and supports a lot of experimentation and little tweaks while still delivering a proper .NET application. Sure I keep running into bugs here and there and some unfinishidness (such as missing recursion, instantiation by name and needing to use each class in a runtime patch if I want to deserialize it) and sometimes a runtime restart is needed but more often than not it’s smooth sailing. Using vvvv modules as fillin for features yet to be implemented natively is also brilliant and maybe by the time I have everything in VL, gamma might even support exe/assembly? output :)

Speaking of which, I’m still a bit unsure how to design a proper plugin architecture using VL. I can reference various documents, string them together and each injects its own stuff into the runtime (new Blocks, extra routines) but it still requires some extra manual patching effort on the side of the user. Ideally this would be just dynamic loading of assemblies from the patch itself and a common plugin entry point would be used to add functions. Will this be possible after gamma export or is it too far out? Or maybe it’s already quite possible and I’m just missing something?

Might be best to just talk about this stuff personally next time I join a meetup :)

@systray27 Thanks a lot! I’m keeping a close look at your VL.NewAudio library, the CV demo sounds pretty damn sweet already. I plan to eventually have Audio Blocks as well and a big part of the program is audio analysis which as of now runs from vvvv nodes but I do want to fully support gamma eventually. I was looking into NAudio as well and it looked promising so I’m really glad someone took up to make a proper VL library on top of it.

Also a little update might be in order, don’t have time to make a big video right now but here’s one with a few things that I’ve added very recently and think might be worth sharing. On top of some much needed cleanup of my convoluted experimental patches (of which I still have plenty to do) I’ve added:

The video shows 4 light Fixtures all loaded with identical Block Stacks with Repeat and Constant blocks controlled by an MPD218 Midi Controller. The Record Driver is set up in such a way that it takes different pads depending on the Fixture’s channel.

Not seen in the video but also of note is the reworked Browser, now using the same Title drawing routines as Blocks for visual consistency and also now it understands categories, which work as folders. Pressing Esc goes back a level. The placement and styling of the textual prompt has also been improved. And now it’s also finally possible to define your own groups via the UI just by typing the new name in the Browser and pressing Enter (it wasn’t before).

It’s easy to record the screen so here’s some more but still without commentary.

This just shows the general workflow and also the Browser.

@domj You’re crediting the wrong person here, have got nothing to do with new audiopack. But cool to hear what you are going for here!

@systray27 my bad, it’s synopia. Guess I got confused by the av synthwork and ADSR questions you were dealing with. The synth’s visuals are really interesting btw, great sync with the MIDIs.

@ravazquez Thanks a lot! Keep your eye on the blog.

Yesterday I went to Berlin to join the lovely meetup #9, got to do a presentation on Schéma and managed to record it, so here it is. Probably most in depth video available to date.

Just put up a new blogpost detailing some of the recent additions to Schéma. It’s kind of long so I think it’s better not to copy it over here, but feel free to reply here.

@domj thanks for the compliments, I will try to check Schema soon. Who knows it can help in my work :)

@sinus Thanks a lot!

Here is some recent development from today, I’ve added Blocks to support “Painting”. That combined with OpenVR integration and other tools in Schéma allowed the creation of this interactive prototype:

Behind the scenes development livestream recording:

I wish you happy stacking! Schéma 0.1.0 alpha out now!

Dear Explorers, Today on the International Day of Light we celebrate a pivotal moment which happened 80 years ago - the first use of a laser. Since then we have come a long way, with sci-fi technology of the past becoming ubiquitous today. To...

0.1.1a out now with support for external Audio Analysis

0.1.2a out now with the ability to quickly create your own DMX fixture definitions 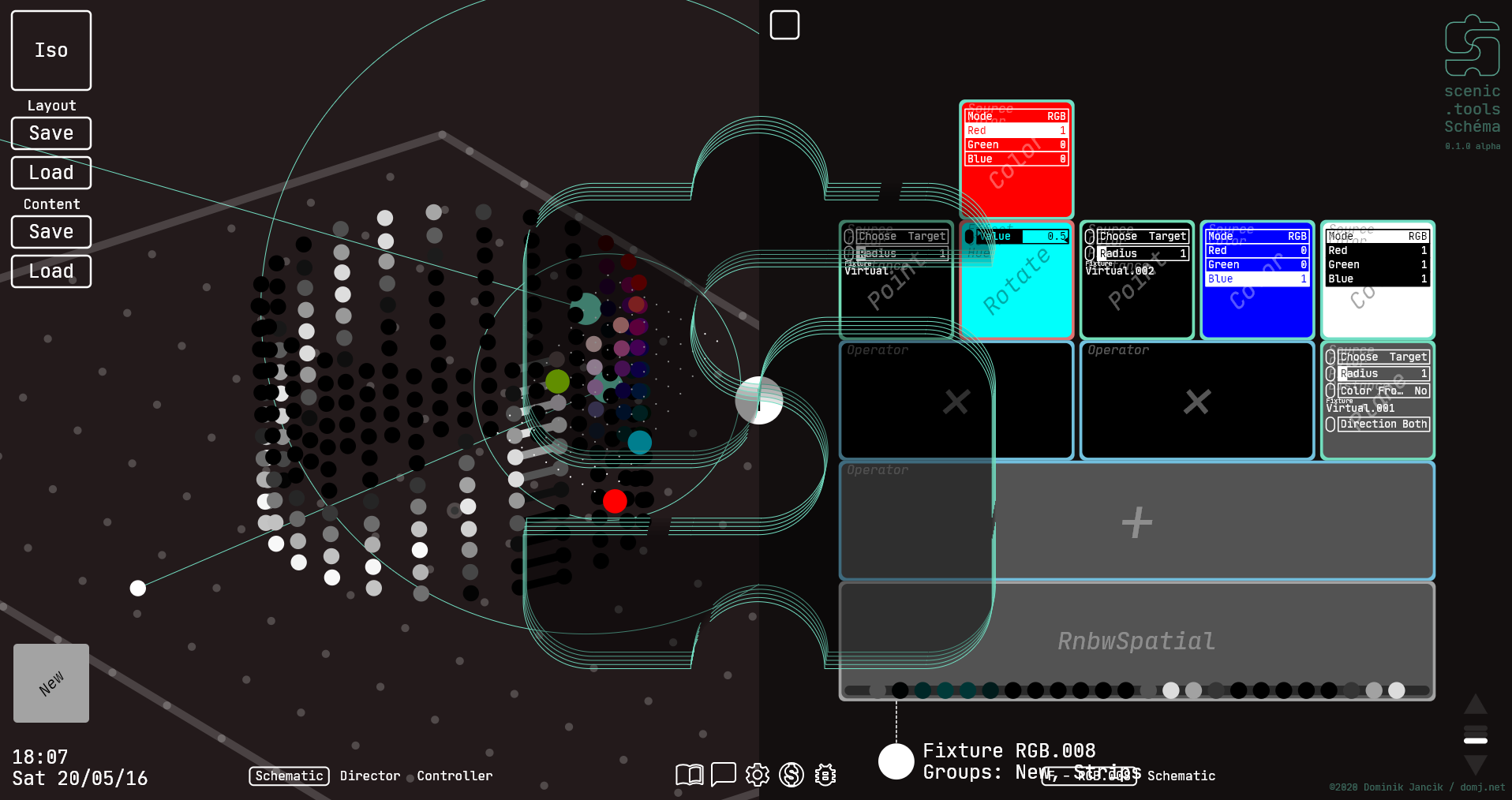 Up until now it wasn't possibly to create your own DMX mappings to cover more fixture models than what comes pre-packed with Schéma. This changes with the Expression DMX Patching feature. Although th...

0.1.3a out with some DALI support (for a specific converter) and a range of fixes.

Schéma now speaks DALI. Ok, maybe not fluently but it's something 😉Use the DALInet plugin to control DALI fixtures if you happen to have the Foxtron DALInet converter. Furthermore there are some f...

Also the Plugins part of the documentation got some much needed love, so make sure to check it out!
https://docs.scenic.tools/plugins/about

For a full overview of the update, please head to the following link: With this update, the performance of the Browser has been improved as only the visible entries are rendered. No more program freezes.
Also a loading animation clearly signifies background work.

Furthermore it’s now possible to output to Group and Broadcast addresses in the DALInet output plugin. See the doc to find out how to achieve that. One of the major additions is the ability to select projects, but there’s plenty more.

Read about it in the devlog over at itch:

This is a fairly big update but the main takeaways are: You can now create and select new project folders right from the UI. Create a new clean slate for each of your experiments! Read more about proj...