Projecting onto a geodesic dome from the outside?

I would like to call on the community for some assistance again please.

For my final project on my degree I have undertaken the task of creating an immersive AV environment. I’ve chosen to try my hand at projecting onto a geodesic dome and I’ve a few questions.

Firstly; I’m not the most experienced Vvvv user, would this be something that’s a little ambitious for my skill level?
I have about 10 months to do this but ideally I would like to have the projection aspect of this sorted asap.

I’ve also (on researching this on Google and these forums) seen it written that a fisheye lense is required; however I wonder if there’s away around this?
I was hoping that I could get away with just using 2 normal projectors for this, one on each side… Maybe 3. Would this be possible?

In Vvvv what sort of geometries should I be looking at using for projecting onto a dome?

Is there any other advise or resources I should look at for this?

I’ve seen these threads so far:
https://discourse.vvvv.org/t/7526
how to project on 3d geometry
undistorting projections

They help but still don’t cover everything I need to know.

Thank you in advanced for any help :)

Also; I’m a little unsure if I’d need to use 2d geometries like a segment or a 3d sphere geometry to project onto?

Some questions…
is it a geodesic i.e. made from joined triangle or a dome? Geodesic should be easier to lineup as you will have some points that can be match between model and real world.
A fisheye is only if your projecting inside the dome, and you say outside…
Projecting on round thing takes more than 2 or 3 projectors as the image stretches around the object, dims, and physically can’t hit the edges, again if you outside, if your in, you will still need more as your field of view is limited.
I’d suggest playing with vvvv.packs.projectorsimulation to work out how many and what specs you will need…

Hey, thank you for getting back to me :)
It is a geodesic dome with joint triangles. 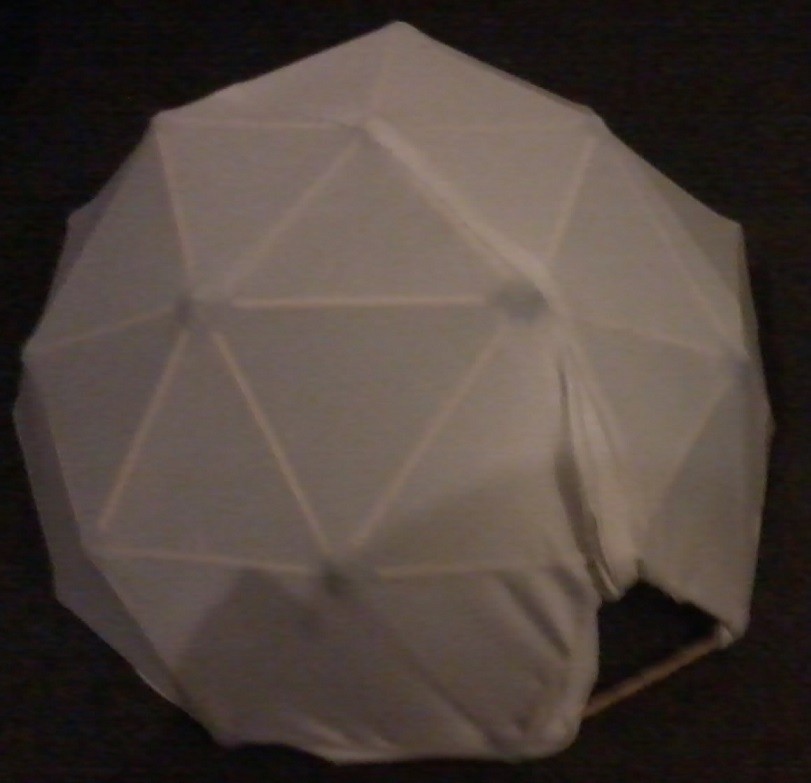 I’ll have a look at that projector pack and see what I can work out. I’ve a feeling that I’ve possibly bitten off a litte more than I can chew with this one :S

So far research has told me that I’ll need to have a desktop with multiple graphics cards to do multiple projectors. Is this the actual case?

I’ve 2 laptops and 2 desktops available. Though 1 desktop is my home PC and the other isn’t very powerful.

Could I do this with 2 laptops? VGA & HDMI outputs on each laptop.

as cat mentioned, you can make your life a little easier when you use the triangles instead of attempting a seamless surface. with a hardedged setup things are easier then with softedging on curved surfaces.

regarding your question: is this DX11 or good old EX9?

having actually worked on projecting inside a geodesic dome, here is what I know (have a look here: https://www.facebook.com/urban.reaction?fref=ts)

I was there during the early stages and we have tested a lot of setups, to get it to where it is now.

You will need 3 projectors at least. 2 will definitely not work. You have to remember that when you project onto a spherical surface that the illumination and resolution towards the edges will degrade heavily. With 2 you will not even cover the dome fully.

You will need 1 computer with 3 equal outputs. Mixing different outputs is just a pain and one usually has some sort of restriction which the other doesn’t have. Have a look at the Matrox Triple Head 2 Go, but you will need a good graphics card. In general you will need one computer that has sufficient power to do a lot of things. Playback of the content, which i guess will be interactive in some way, warping, etc. is a lot of heavy work and you don’t want any stuttering. So have a good desktop class computer.

No geodesic dome is ever geometrically perfect, not even between setting it up again in a different location. So make sure you can recalibrate everything.

If you are projecting from the outside keep in mind that your projectors will need to be high up tilted down and not on the floor, otherwise the “ceiling” will be a lot less bright, lower resolution and out of focus. Depending on what kind of projector you have, that will be surprisingly far and high up. Projectors are designed to project onto flat surfaces, so projecting on something that is basically round, will lead to a lot of weird things, but focus is usually the main problem - normally its about finding a compromise so nothing looks too bad ;)

I don’t want to put a downer on your idea, but it will be hard and rather costly if you havent got those things already.

How big is your dome?

What kind of space do you available for testing?

Wow thanks for the replies.

Projectors - At the moment nothing fancy at home for myself. At my uni though I’m pretty sure I’ll have some Optimas available to me. Optoma HD131XE I think.

My current home projector is just a cheap Sanyo one which I got for £20 second hand on ebay. It does the job for now, I was thinking that due to the nature of the visual content super high quality isn’t totally needed.

The content isn’t anything high def. Probably something similar to this:

THe Matrox Triple Head 2 Go looks like it will do the job. Do you think the specs of my computers would be enough?

The dome its self doesn’t need to be all that big. 2-5 people inside (sitting) so probably 2-3m diameter or something. It’s not a huge structure.

For testing, I’ve a pretty large space potentially at my disposal. I know you can’t really tell from this image, but it gives you an idea:
{img src = “http://arts.brighton.ac.uk/__data/assets/image/0007/26377/Graduate-Show-Brighton-2007-architecture.jpg”}

I plan on doing this all on a small scale model at first to get the hang of the actual logistics of it and then build a larger model to test in the environment.

Would it perhaps be easier to project onto a teepee type shape over a dome? It doesn’t have to be a dome; I would prefer it, however if it’s logistically easier to go with a different shape than that isn’t a huge issue (not a cube/rectangle).

“regarding your question: is this DX11 or good old EX9?”

Is it really bad that I don’t know what DX11 is? Or the difference between the two?

The “problem” with testing at home on a smaller model is that it will not be the same as the final thing. If you will have 3 projectors in the end, you will need 3 to test stuff out, especially if you have never done anything like this. Because that is the hard part, to make stuff go from one to the next seamlessly and without (or rather “with the right”) distortion. Also creating content that works if it is projected in a dome shape and that is, you know, in some way better that it is inside a dome.

With stuff like this its easy to forget that it needs to have some value that it is in a dome and not just “because you can”. Especially if this is for a final uni project, which I assume it is!? Are you an interaction designer? Or media art?

In either case the content is king. I actually saw an interaction design final project the other day. It was a large floating cube with projections on 4 sides. The visuals were a filmed story that was vj’ed live and live music played by a really good electronic musician. They both sat inside the cube to perform. But yeah, the technical design of it was rather simple, but it was good because of the content (the story of the film and the music).

So I just want to say, having done a master in interaction design, that if this is a uni project dont spend too much time on technicality, but rather on content. Funnily enough I actually wanted to use that dome from the link in my final project, but it quickly became obvious that the dome didn’t add much except complexity.

Anyways, if you want to go for it, go for it. Its certainly possible to do something cool, but just keep in mind the content, because that’s what people will see, the fact that they are sitting in a dome surrounded by video alone will not impress many people.

Yeah I guess a tepee shape could work quite well too. It will be easier to set up, because it has more straight lines and faces and you can use more of the available projector area.

2-3 meters is really small though. You need quite a big structure so that you can sit comfortably lie/sit in the middle of it. Remember the best surround effect is if you are right in the center. The bigger the structure, the more you can be slightly on the side. But for a 2-3 meter one you could only lie down with your head in the middle and your feet sticking out the front. You wouldnt even be able to stand in it, let alone 5 people. Well, the reason cubes and rectangles are used so much is that they just make life infinitely easier, when using projectors. No distortion, no problems with focus and different size pixels, easy mapping, etc. It just makes sense. There is still a lot you can do with 2 or 3 projectors and some flat surfaces. they can be semitransparent, stacked behind each other.

DX11 and EX9 and 2 rendering technologies in vvvv. DX11 is the newer one, using DirectX 11 and has a lot of cool new features, but is quite a bit harder to use (I think so at least). If you are going to be generating content in vvvv, then you should start learning how to use them.

Also dont forget sound. Having surround sound in a dome is really important, because it adds a lot of believability to that 3D environment. That is one of the areas that vvvv is not so strong in (yet), although they have added some serious audio capabilities recently, but I think they are still in alpha stage. So just keep that in mind.