simplest plugin in the world
for those times where you just want to make that IOBox ask for an Int!

thanks to vux for guiding me through how to optimise this
(and supporting the plugin community in general)
so it’s a very low overhead plugin, dont be scared to use it!

i did this using
*Radix (Value) or
*SpellValue (String) with Ord (String) when i needed spreadable negative integers.

both waste performance, when spreaded.

dear devvvv’s, please include this into beta>21!!!

do you think it would be possible to integrate a ‘frac’ so that also the output is forced to integer?

furthermore i could imagine a MIN and a MAX pin to clamp the range being useful.

@kalle, yes would be possible.

I think that having an option in the iobox to force to int would be the best option performance wise (like using the enum for slider/bang/toggle, just add integer there and the iobox stays int whatever happens).

of course this would be better. this one is very old on the wishlist! IMHO optimal: an enum-pin with all subtypes

but new features means new bugs. i can understand the devvvvs being careful to touch this essential node.

Can implement range and output as int as well
any other quick suggestions before next build?

maybe an option for floor/trunc - round - ceiling. how it treats the floatingpoints

though i don’t fully understand the use of this plugin. if you connect the incoming iobox to something else, it’s float again.

if you reconnect the plugin. it becomes an io with 2 decimals…

hey woei
the (original) idea for this, is to ask for an int (as opposed to give one out)

the use of asking for an int, is for interface ioboxes and for inputs on modules

so if you’ve got a module (say you’re making your own linearspread!)
chances are that you want to make one of the inputs an integer (i.e. spreadcount). the problem is that if you connect that input to anything that accepts non-integer values inside your module (e.g. a ‘+’ node) then your iobox starts asking for a non integer value.

this is essentially a UI plugin, a companion for IOBox

Perhaps could make another Int which is for making ints (round, floor, ceil as you suggested)
that’d be a ‘make into int’, this is an ‘ask for int’

(also, rather than connect the incoming iobox to something else, you use the output of the ‘Int’ node, that way iobox still asks for int but all data is passed through)

rather than connect the incoming iobox to something else, you use the output of the ‘Int’ node, that way iobox still asks for int but all data is passed through

…and that’s exactly what i need every day.

here my radix method with its wrapping behaviour 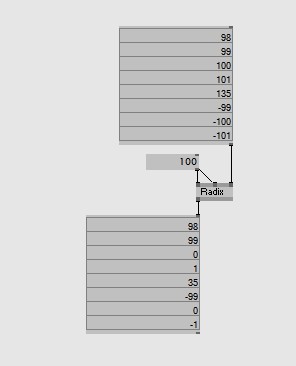 is this (the plugin) doing the same as below, or am i missing something?

Wow cool one, well, Diki, the Int Plugin also accepts input from other nodes and gives it as integer.

you could use the difff.xml to make replacement easy…

The problem with Diki’s solution is that as soon as you connect the first IOBox to something that asks for a real number, it’ll stop asking for an integer.

that’s true. the only comfort is that, if the first connection you draw goes to an integer-wanting pin, it will be integer-wanting again on reload.
anyway, good idea to solve all this hassle with a plugin! :)