I’m experiencing some strange issues with Midi Clock and Midi Notes in a two computer - setup with Ableton Live and V4.

The midi connection is established with via network (rtpMIDI) and works quite reliable apart from the described midi clock issue.

The midi clock node klicks perfectly in tune with the Ableton Live set UNTIL a Midi Note is sent from the same set. As soon as this happens, the midi clock node freezes at it’s current position and refuses to contine running.

Any ideas on this?

Is there a way to find out what’s going on?

ok, for the records:

using midi-clock, midi notes and patch switching systems with V4 and ableton live is not exactly a walk in the park as one would expect.

V4’s Midi-clock node will stop working (freeze) as soon as it is used in the same midi-session with other midi signals (notes or controllers). I would rate this as a V4 bug.

Also Midi-Clock will jump as soon as patches get switched or loaded with Set-Patch.

Additionally the position in the measure will be grainy & jittery, a bit similar to the behaviour of LFO in boygroup setups. This can be solved by some clever dampering.

Not enough, there is an issue with Midi-Clock and Ableton Live productions over 1025 bars. Check: https://forum.ableton.com/viewtopic.php?f=1&t=144759

I ended up using one separate computer just for the midi clock measure counter, constantly aligning the current measure with the other machines and distributing the current “master-clock” over UDP.

It works but, as I said, it requires more tweaking than expected…

indeed sounds like a bug…
a related read: http://de-bug.de/musiktechnik/the-impact-of-clock-jitter-on-midi-syncable-daws/

hi zepi, i did a quick test with Ableton Live via LoopBe and everything was fine. so i would say its rather a problem of the midi driver that you used.

could you do a patch and a live set which demonstrate the bug? 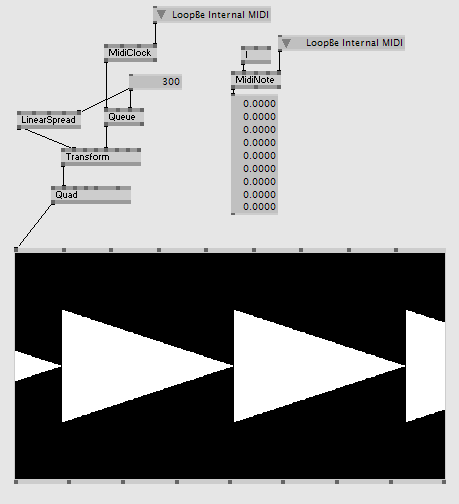 why not just using osc transport out for this? works perfect for me…